Africa Rise and Shine and the changing African narrative

Almost two decades ago, Africa was tagged the “Hopeless Continent” in the May 2000 issue of The Economist. Hitherto, the continent was portrayed as ravaged by wars and coups, poverty and famine. It was a general negative narrative of Africa in the media.

However, a decade later from this time, the paradigm began to change. The world began to see the bright future of Africa. To this effect, The Economist went on to categorically reverse its position in a new cover story for its 2011 issue called “Africa Rising”. The story revealed that Africa had never been hopeless.

In a recent interview with Bloomberg TV, the Founder/Chairman of Zenith Bank Plc, Mr. Jim Ovia explained that this perception of Africa from a hopeless continent to a continent now rising inspired the title of his book, Africa Rise and Shine.

According to him, African economies are beginning to do extremely well. With democratically elected governments and thriving businesses, which was not obtainable 25 – 30 years ago, African economies are now rising and shining. Hence, his book, Africa Rise and Shine would further contribute to the positive narrative of the international community and media perception on Africa.

Africa Rise and Shine is now available on Amazon 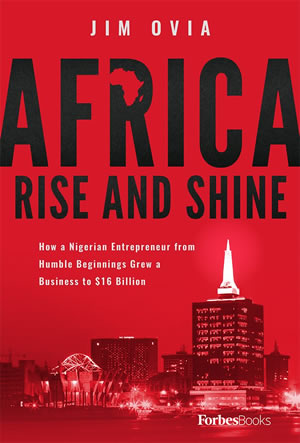 See excerpts from the interview below: